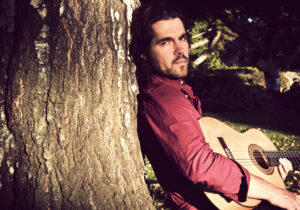 Ivan Tucakov was born in Belgrade, Serbia. He shared his childhood between southern Turkey and Serbia, where he was immersed within the cultural influences of both Eastern and Western music. During this time he developed an interest in guitar and studied under the Berkley School of Music curriculum. In 1998, Ivan moved to Vancouver and made the decision to pursue a career in computer science. He graduated with an honors degree in Computer Science and Physics at the University of British Columbia.

With a desire to maintain music in his life, Ivan formed the Tambura Rasa collective in 2004 with the aim of expanding the boundaries of world-fusion music. He studied flamenco guitar in Granada Spain, while his journey further took him in the direction of music composition, production and musical direction. Ivan has since released eight collections of original compositions, predominantly influenced by Indian classical to Turkish, Balkan and flamenco music. He has produced electronic mixes, some of which were released on the European Café del Mar lounge compilations. Tambura Rasa’s albums “Adsum”, “In Concert” and “Arribada” all got nominated for Best World Music Recording of the year at the West Canadian Music Awards (WCMA).

In 2012, Ivan started a classical world-fusion project called “Vino & Forte” with pianist Oriana White, and has since produced and released two studio albums together. Vino & Forte currently organizes collaborative concerts and regularly performs for special events and concert productions across the province.

In 2021, Ivan Tucakov wrote and produced his eighth Tambura Rasa studio album entitled “Infinite ∞”, releasing it on vinyl record for the very first time. This production explores ever newer musical territories, adding modern-classical, folk-americana, and even prog-rock into his growing “world music repertoire”.

Tambura Rasa is a buoyant cultural cross-pollination that fuses contemporary grooves and traditional rhythms into one energetic musical brand of their own. The act weaves a tapestry of sound and dance from The Balkans, Spain, Turkey, Middle East and beyond.

They have become BC’s favorite caravan of vivacious globalistas, filling everything from intimate soft-seat theatre shows to large dance filled festivals in attempt to bring joy, vigor and dance to the world around them.

Join them as they merge the sounds of the East and the West, of the present and the past – a show of contemporary musical fusion and variety of cultural styles from all around the world.

“As the globe stresses and strains along artificially drawn borders, Ivan Tucakov and Tambura Rasa pick up the musical threads that bind us all and weave them into a tapestry of discovery and delight.”
– Cal Koat – World Beats Radio Canada